Could a blockchain based electricity network change the energy market?

Could a blockchain based electricity network change the energy market?


Blockchain: The new technology of trust

As IBM says "Blockchain is a shared ledger for recording the history of transactions - that cannot be altered." A business works on multiple transactions. Each contributor has his own ledger true to himself. With multiple ledgers, it becomes easier to perform fraudulent activities. Thus, the goal is to see an end-to-end transaction, which makes sure that there are no vulnerabilities.
With blockchain there is a single shared ledger, which cannot be altered. Every new transaction added to the network needs Consensus from all parties. As each transaction occurs, it is entered in a block.
All these blocks are added together in an irreversible chain.

Blockchain technology is being used in various industries, one such area is the power and energy sector. Renewable energy has seen major advancements in the past three -four years. Advanced battery storage technology has made it easier to save energy that can be used during power cutoffs; it is also becoming easier to trade in energy as the storage capacity has been augmented due to solar panel efficiency. With these advancements and consumer awareness in the renewable energy market, a new set of people called urban energy prosumers have been seen. Prosumers are nothing but someone who consumes and produces energy at the same time.They produce part or all of their own energies with renewable “green” technologies such as solar energy, and are willing to trade energies with their peers.

Peer-to-peer trading is gaining a lot of traction as it cuts out intermediaries. It can provide flexibility with the supplier and tariff options in the society. Moreover, the microgrid model helps lower carbon emissions while raising energy capacity due to short distance transmission.More than 100 blockchain pilot runs have been made in peer-to-peer energy trading, using distributed energy resources. A concrete move towards a better future of smart cities. A good example would be a startup called "Scanergy" funded by European union's seventh programme for research and technological development. Another such famous organization who has taken this initiative is the Brooklyn Microgrid a joint venture among LO3 Energy and consensus system. 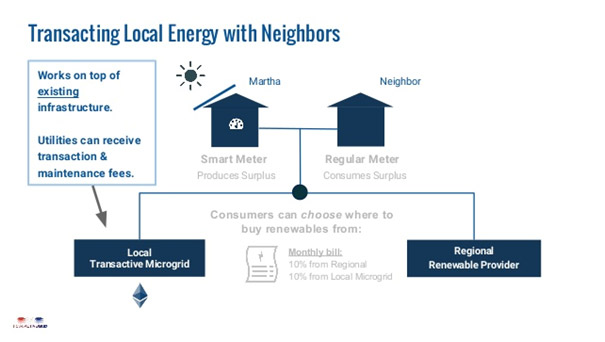 The flow of electricity is automatically coded into blockchain and algorithms match buyers and sellers in real time based on preferences. The pilot runs made till now have used pre - programmed "smart contracts"These smart contracts can be set to allow prosumers to feed surplus energy into the grid through a blockchain-enabled meter.

As promising as it sounds, it is still in its inception. A whole bunch of legal and regulatory frameworks needs to be fulfilled A dedicated prosumer safety guidelines needs to be published. Before the decentralized transaction model can be implemented. There needs to be a regulated hybrid system where both centralized and decentralized energy exchange can exist.